The Countries of Africa – The Course.

Seven class members ran sessions and we had a wonderful guest speaker from the local South Sudanese community.

Class members have commented that they really liked learning about fascinating countries; the mix of culture, politics, history, geography, current events and personal stories; the various perspectives of members’ and guest speaker’s contributions; and the always lively discussion.

One thing we learned was that despite many problems, things are gradually improving in most African countries. In fact there are signs that in the 21st century the Rise of Asia will be closely followed by The Rise of Africa.

For a fascinating introduction to 21st century Africa, browse the TEDGlobal 2017 Conference website at https://blog.ted.com/category/tedglobal-2017/ ; and look at some of the TED talks at https://www.ted.com/topics/africa .

Who knows where we will go in 2018! Angola, Malawi, Benin, Africa’s small island nations, The San and Khoi Peoples of Southern Africa … we have plenty to choose from, and several members keen to contribute. There will be a general introduction, and sessions on topics such as “Slavery” and “Australian Involvement in Africa”. We also plan to arrange one or more guest speakers from local African communities.

Here’s a challenge to get you started:

The Countries of Africa: A Challenge

There are 55 countries in Africa (or more, depending on who is counting).

How many of them can you name (without using an atlas or the internet)?

The map below might help (or not). Can you place the countries you have named on the map? 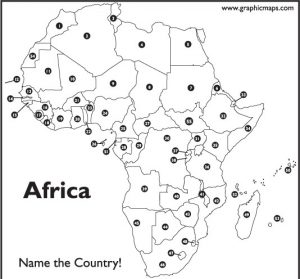 If you tried this challenge, then clearly you are interested in Africa, and you should consider enrolling in our Countries of Africa course!

ANSWERS not supplied. Now you can use whatever tools you like – atlas, Google maps, Wikipedia – you’re on your honour.

If you scored 10 or less, you need to come to increase your knowledge!

If you scored 20 or more, and placed more than half of them (correctly!) on the map, we need you in the course to share your knowledge!

If you scored between 10 and 20, then you are just like most of us in the course – you would be among friends, learning together!

Links to other sites